Join us for our Livebearer Webinar: Xany for Xiphs with Dr. Ted Coletti 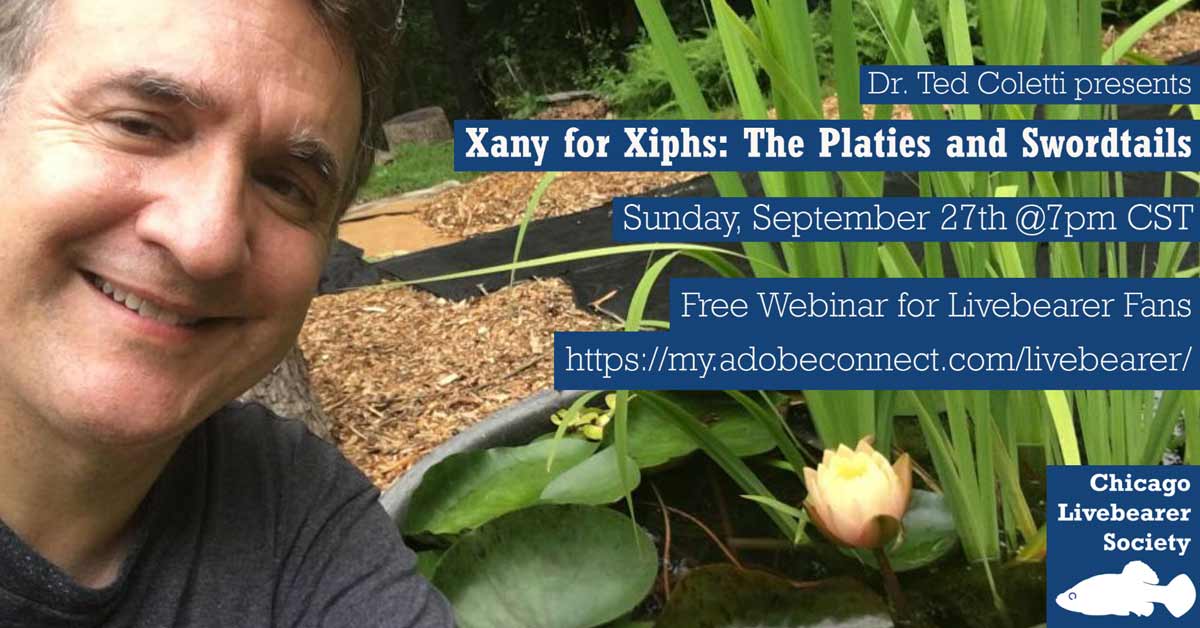 Ted Coletti will speak on "Xany for Xiphs: The Platies and Swordtails"

Join us at 7PM Central Time on Sunday, September 27th. You can join from your phone or your web browser. 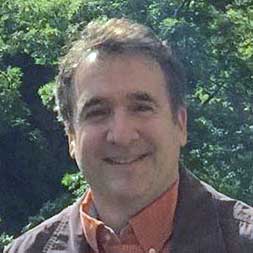 Ted Coletti (NJ) has been a hobbyist for over 30 years. Ted comes to us from the NEC's North Jersey Aquarium Society as Master Breeder and Expert Grower. He is also a member of the Ali Shan Aquarium Society. A writer and teacher by passion, Ted has penned over 200 articles and columns, and a book, and has presented programs on various topics around the country.

Ted's interests are varied. In the 1990's he took part in the biotope aquaria and live plant renaissance. His "Aquarium Geographic" column in Freshwater & Marine Aquarium Magazine (FAMA), ran from 1995-2000. He established the Grower's Award Program at his local club.

Being a Hobby Historian is another role Ted takes very seriously. In 2002, he founded the Aquarium Hobby Historical Society of America. The Group meets on Yahoo and Facebook and has established a large archive of reference material. Ted also serves as his local club's Historian and Archivist. Ted maintains a collection of historic hobby literature and artifacts.

For the past 20 summers, Ted has been propagating tropical fish, waterlilies, and native aquatic plants in over two dozen tub ponds on his property. He has inspired many hobbyists to participate in this old but forgotten practice through his writings and speaking engagements. In 2015 he founded the Northeast Fish Tub and Water Garden Study Group here at the NEC. The group has an Annual Symposium and Auction at the Convention and meets on Facebook. He is currently writing a book, Fish Tubbing and Container Water Gardening for the Hobbyist which he hopes to publish this year.

Born and raised in The Bronx, New York City, Ted received his B.S. in Psychology from Fordham, and his M.A/Ph.D in Counseling Psychology from Seton Hall, specializing in Statistics & Measurement. A former Adjunct Professor, he has worked in the field of Marketing Sciences for over 20 years, currently in the cancer drug industry. He resides in the Skylands region of the Garden State, with his patient wife of 25 years and his teenage son. His daughter is an environmental policy student at Hampshire College in Massachusetts. In his remaining spare time, Ted enjoys singing and playing with local musicians, tinkering around the yard, and volunteering at the homeless charity, Bridges Outreach. He changes water as infrequently as possible.

Covid and our Meetings

Unfortunately, the Chicago Livebearer Society is unable to meet currently due to COVID restrictions in the State of Illinois.

Governor Pritzker has laid out plan to gradually reopen the state in his Restore Illinois Plan.

Restore Illinois Stages: When could we meet?

Illinois is currently in Phase 3 of the plan and gatherings of more than 10 people are prohibited.

CLS could meet when the state moves to Stage 4 (50 or fewer people). We would have to find a new meeting place to do so and masks and precautions would need to take place.

Historically, our club meets after Greater Chicago Cichlid Association Swap Meets. GCCA's next swap meet is planned for September 27th,These very large events would take place in Stage 5 since they attract over 1000 people.

To move to Stage 5, a number of key items items would need to be in place:

Testing, tracing and treatment are widely available throughout the state. Either a vaccine is developed to prevent additional spread of COVID-19, a treatment option is readily available that ensures health care capacity is no longer a concern, or there are no new cases over a sustained period.

What about meeting virtually?

CLS collaborated with GCCA to have Andy Piorkowski present in May 2020. We are looking at other speakers, too.