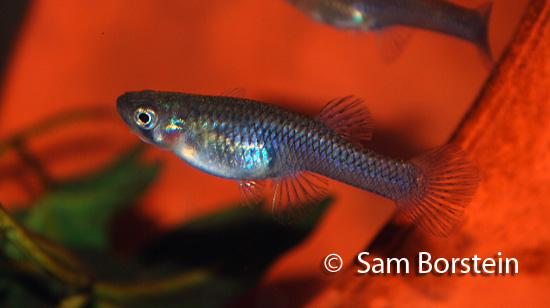 The Eastern Mosquitofish is a very interesting fish. This livebearer, first described by Girard in 1859 is very active and a bit nippy. This fish is very similar to the Western Mosquitofish, Gambusia affinis.

Many Gambusia species are used for mosquito control. Gambusia holbrooki and the similar Gambusia affinis are some of the more popular species stocked into ponds for this purpose. This usage has been controversial and many states and countries list this fish as an invasive species. It depletes mosquito populations, therefore causing native species to struggle. On the other hand, it reduces diseases like malaria.

This fish is tolerant of a wide range of water conditions. Since it is so adaptable, it can easily migrate to areas beyond where it has been introduced.

I brought mine back from Sanibel Island, Florida in brackish water. On another trip to a different location on the island, I found them in 95 degree pool in almost pure saltwater.

Gambusia holbrooki is found in brackish and freshwater bodies of water. They are extremely temperature tolerant. This fish is found on Atlantic coastal states, and on the gulf coast of Florida.

Eastern Mosquitofish are easy to care for and undemanding. A group of 15 can easily be kept in a 10-gallon tank without a heater. They can be mixed with other small and docile fishes in a larger community set up, but wild specimens can be nippy towards tankmates.

As its common name suggests, the Mosquito fish eats insects and their larvae, like mosquitoes. These fish will eat anything under aquarium conditions. A mix flake is recommended.

This fish is very easy to breed. It's such an easy fish to spawn many propagate it as a live food. Males use their gonopodium to fertilize the females. Females will swell up with the babies inside them, and after about 3 weeks, give birth to anywhere from eight to 25 babies.

The fry do have umbilical cords, but lose them after birth. Fry grow fast and by three weeks may be sexually mature!

Eastern Mosquitofish are interesting livebearers. Personally I like them a lot. Any livebearer fan should try them once, if only because they are so easy to find and collect. They are usually easy to obtain from the wild but seldom in the hobby or seen in pet shops.