The Blue Tail Goodeid is a critically endangered species of livebearer native to Mexico. These livebearers are not showy, but are interesting none the less. They may be kept with other kinds of fish. I kept some with Geophagus metae successfully for months, although fry may go missing.

Ataeniobius toweri tell you when you need to do a water change and may be thought of as an indicator species. As Mike Schadle would say "They let me know pretty quickly if my weekly 50% water change is behind schedule". When the males lose the blue color in the fins, it is time to change the water. After a water change, the blue tail will usually sparkle.

This fish, typed by Meek in 1904 and named for Dr. W. L. Tower, was for a very long time considered a primitive livebearer since it nobody had observed fry which showed the typical goodeid trophotaenia (umbillical-like structure) at birth. Thus,this genus Ataeniobus is at present monotypic.

However, Pat Hartman (ALA Fellow) showed a picture of a Blue Tail fry with a trophotaenia when he spoke to CLS in 2013, so it looks like the scientists were wrong.The fish overall is similar to the genus Goodea and don't be surprised if you see this species moved to that genus sometime. 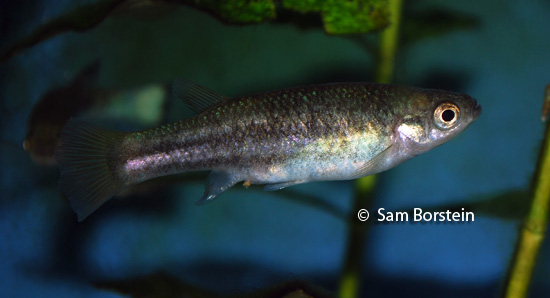 Ataeniobius toweri are easy to care for and keep. They are peaceful, so they can be kept in a community tank, but may occsionally give a weak chase to other fish. They also prefer warmer waters than other species from their genus, so you can keep them like any other tropical fish at 72-80 degrees. I think they do best at 72 to 76F, but I have successfully kept and reproduced them in a pond during a hot Chicago summer. For ponds, just ensure adequate aeration.

Blue Tail Goodeids are omnivorous and will eat anything in aquarium. You should feed them vegetable-based foods for the most part..

Blue Tail Goodeids breed like most livebearers. This species has a very long gestation period, a little over one month.

The fry are huge when born, and therefore small in number. The largest spawn I ever had was nine, but the fry are a little over 3/4 of an inch! The fry hang at the top of the tank for their first week out of the womb. fry are easy to raise on either baby brine shrimp or crushed flake and grow quickly.

The parents will chase the fry, so it is best to remove them as soon as you can. Provide cover at the top of the tank with floating plants. I was successful using floating plastic plants.

Ataeniobius toweri is an underappreciated fish in the hobby. It is a beautiful goodeid and is one my favorite livebearers.