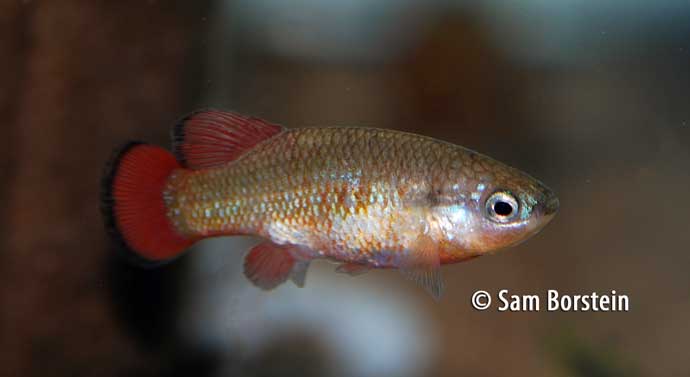 Characodon lateralis "Guadalupe Aguilera"is a livebearing goodeid from the Pacific Coast of Mexico. The common name for this fish is the "Rainbow Goodeid" and some varieties do seem to show quite a few colors. The example above from "Guadalupe Aguilera" is an attractive fish with bold red markings.

All of the Characodon are known have been found in a geographically isolated area of Mexico. Depending who you believe, there are between 3 and 5 species of Characodon total. One thing which isn't in doubt is that Characodon lateralis is endangered in the wild (ICUN Red List) which is a good reason aquarists should maintain them, keeping careful note of the location.

Female Characodon lateralis "Guadalupe Aguilera" are more humble in appearance. The background of the female is tan. Depending on her mood, she may appear speckled or only show a couple of spots on the flanks.

This fish is found along the Pacific coast of Mexico in the headwaters of the Rio Mezquital. Characodon lateralis is usually found in shallow water of less than a meter in pools and creeks, or sometimes in the quieter parts of rivers.

Characodon lateralis "Guadalupe Aguilera" is probably not a fish for the beginning livebearer hobbyist. It's expensive and can be aggressive toward one another. I believe aquarium specimens bred over several generations loose some of their aggression. I was able to keep seven indviduals in a ten gallon tank with now intraspecific aggression.

Like most goodeids, you should keep this fish on the cool side between 68F and 76F in hard water. They do best around room temperature of 72F.

In the wild, Characodon lateralis "Guadalupe Aguilera" are mostly algal grazers. In the aquarium, they readily accept flake food. Experienced breeders of Characodon sometimes warn against feeding a high protein diet. For that reason, I would recommend offering a good quality vegetable flake. I fed mine HBH Graze and Dainichi Veggie Deluxe pellets.

I obtained five young Characodon lateralis "Guadalupe Aguilera" at the 2008 ALA Convention. At the time, they were about an inch long. I placed them in a ten gallon tank in the bottom row of racks in my fishroom.

The tank was furnished with a sand bottom and sponge filter. No heater was used on the tank and water temperatures ranged from around 68F in winter to 74F in the Summer. I also added several plastic plants and java moss to the tank.

When the females started approaching two inches, I saw a noticeably gravid female. About a week, I observed a few small fry in the tank but they seemed to get picked off by the adults. A couple of weeks after that I netted out another gravid female and placed her in a breeder trap and ten days later found 13 very large fry in the trap.

The large fry were immediately able to take baby brine shrimp and a few days later were eating flake food. Initial growth is very quick, but then it slows down at about four months.

I believe most Characodon are seasonal breeders. I got most of my fry between February and May and the fish promptly shut down after that.