Girardinus metallicus is a livebearing poecilid which is found in Cuba and Costa Rica. The common name for this fish is the "Metallic Livebearer" and in the right light these fish appear golden or even have a chrome-like appearance.

Male Girardinus metallicus have a prominent black chin stripe which extends nearly to the tip of the prodigious gonopodium. For a small livebearer, it is a striking fish and visitors to my fishroom always seem to notice it. I do get regularly asked about this fish, so it seems like it has a following.

Female Girardinus metallicus are more muted in appearance. The background of the female is tan/gold. Depending on her mood, she may appear speckled.

This fish is found in Cuba and Costa Rica in stream and ponds which may be brackish.

Girardinus metallicus is easy to keep in a five to ten gallon tank. Furnish the tank with a few plants. males can be aggressive in their pursuit of females, so providing a few hiding spots for the ladies is a good idea. These fish prefer clean hard water. I performed weekly, 50% water changes. Girardinus metallicus is a fish that should be kept on the warmer side. I suggest 75-80F.

In the wild, Girardinus metallicus are omnivorous. In the aquarium, they readily accept flake food. I fed veggie flakes and NLS Optimum H20.

I obtained a small group of Girardinus metallicus from Mike Matthews of the Circle City Aquarium club in Indianapolis in 2008 and placed them in a five-gallon tank. They still reside in this tank today.

The tank was furnished with a sand bottom and sponge filter and some Java Moss and floating plastic plants. A small heater kept the tank at 78F. Males actively courted females and soon after I found some small fry in the tank. In my experience, the parents will sometimes go after the fry, but with adequate hiding places, quite a few will survive. I've periodically given away both adults and fry since getting these fish and my colony has done very well.

Girardinus metallicus is a beautiful little livebearer that every livebearer hobbyist should try. 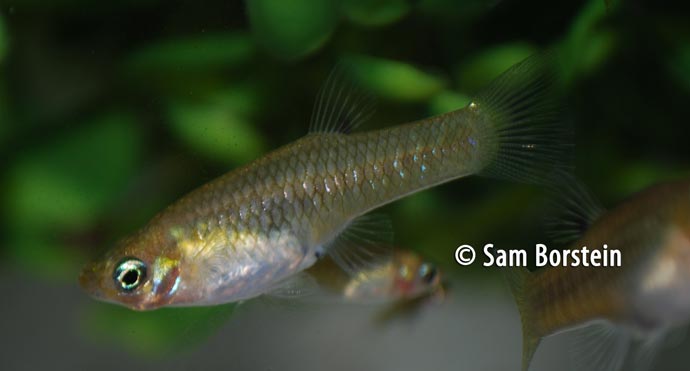