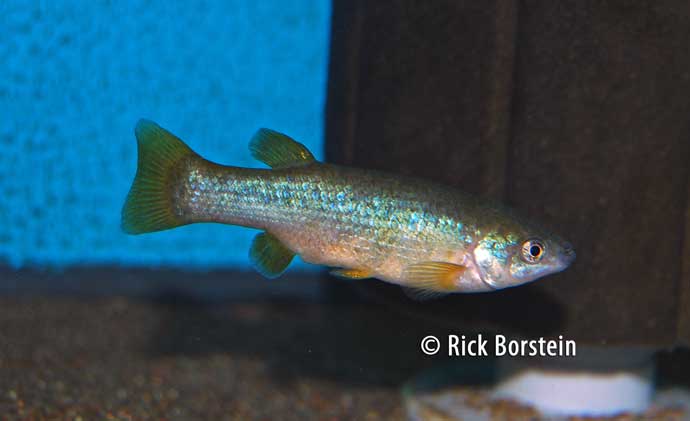 The Dusky Livebearer is a vulnerable species of Goodeid from Mexico that is threatened by the introduction of invasive species. Like other goodeids, it sometimes has an attitude and will chase more peaceful fish.

Both males and females have an overall "dusky" grey-green tone, hence the common name. This fish is often sold as either Goodea gracilus or Goodea attripinus. It is unclear to me what the correct scientific name is at the moment.

Dusk Fin Livebearers are easy to keep. Like most goodeids, they prefer cooler water that is 75F or less. I think they do best at 70-72F.

These fish are omnivorous and will eat anything in captivity. They especially like live baby brine shrimp.

Goodea gracilis breeds like other goodeids. The male gets close to the female and transfers sperm packets to her via his andropodium. This species has a very long gestation period, almost two months. The fry are huge when born, and number between 5 and 30. The fry hang at the top of the tank for their first week out of the womb. Fry are easy to raise on either baby brine shrimp, or crushed flake, and grow quickly.

Although not a colorful fish, Goodea gracilis is critically endangered, and needs our help. It may be difficult to find, but if you see them available, pick them up.