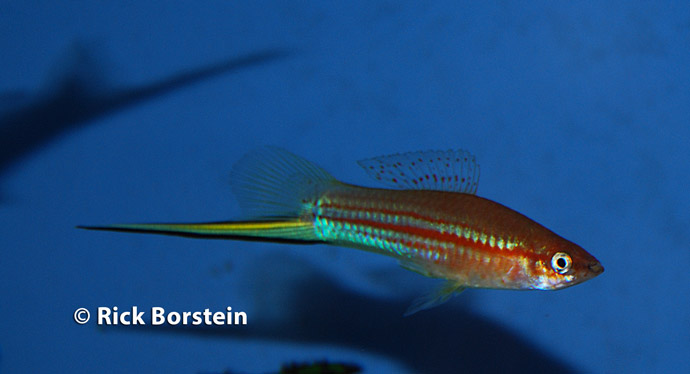 Xiphophorus alvarezi is a livebearing poecilid found along the Atlantic slope in southern Mexico and Guatemala. The common name for this fish is the "Chiapas Sword" which makes sense since Chiapas is smack dab in the middle of the range of this fish. 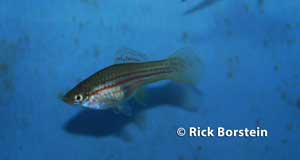 The genus Xiphophorus is composed of 26 described members of platyfish and swordtails. Xiphophorus alvarezi is a member of the X. helleri clade (X. helleri, X. alvarezi, X. signum, X. mayae). Male Xiphophorus alvarezi can be impressive fish up to six inches in length. The overall body color is a orange with pearly white spots and green. The long sword of the mail is bright green with a black edge. Females are somewhat drab in comparison, but may show orange markings on the flanks. Females top out at about 3.5 inches.

In my opinion, Xiphophorus alvarezi is one of the prettiest of the wild sword types.

This fish is found along the Atlantic slope of southern of Mexico and Guatemala. Most often, they are found in shallow, clear pools with moderate current, usually associated with algae-covered rocks.

Xiphophorus alvarezi is easy to keep; simply provide neutral to hard water and temperatures of 68 to 78F. Although generations of aquarists have kept swordtails in small tanks, the more robust wild-type fish should be provided larger accommodations. I recommend at least a three foot long tank.

In the wild, Xiphophorus alvarezi are mostly algal grazers. In the aquarium, they readily accept flake food. I fed a variety of flake and small pellets including HBH Graze, New Life Spectrum Optimum H20, and Dainichi Veggie Deluxe pellets.

I obtained five juvenile fish from Greg Sage at the 2011 American Livebearer Association convention. The group was composed of three males and two females. I placed the fish into a 40 gallon breeder tank along with some juvenile Pelvicachromis taeniatus "moliwe", a non-aggressive West African dwarf cichlid. This combination worked exceptionally well. The two species ignored each other for the most part. The strongly benthic cichlids kept close to the bottom while the swords kept to the upper levels of the tank.

I added some floating plastic plants (Marineland Fancy Plants) and waited for the fish to grow out. Once the males reached about four inches in length, I saw my first obviously pregnant female. Meanwhile, the Pelvicachromis spawned. As the female sword got bigger, I considered how to "harvest" the babies and decided to try out a new product, the Marina Hang-on Breeder Box. This clear plastic breeder box hangs outside the tank and includes a V-shaped breeder plate. The babies drop through the plate away from the female. An airline is connected to move water into and through the box.

This new breeder box worked splendidly. I got 22 babies from the female and (interestingly) eight of them were albinos. I sent a note off to Greg Sages who filled in the following:

[The] line of alvarezis has thrown albinos since I first got them from Rich Serva. The line of albino alvarezi I put in an ALA show a few years back and are now being sold by a number of people on Aquabid were those fish- selectively bred for a couple generations for size and color. An entirely new line of albinos arose from efforts to develop a "4 line" strain of that alvarezi- and they are much more colorful (and a little hardier than that original albino strain), and I will be offering those for sale soon- pics of the new albino line, the 4-lines and the regular line are at the X. alvarezi photo gallery at the website. generally I would get 1 or 2 about every third batch.  As consistent as those have been- the males today look almost exactly as they did when I first got them- and I've had them now about 10 years- it has thrown a lot of mutations I have had a blast with. The 4 lines are finally producing a decent percentage of 4 line fry, and the Golds and albinos are also doing well. The Golds are a trip- almost transparent bright dark yellow with black eyes. They are also almost ready to start selling. So enjoy! A location has never been given, but a couple of people who collect have said that these look to be colored like those from Guatemala.

Xiphophorus alvarezi is a uniquely colored swordtail that is pretty and easy to keep. It is not a species you will find in a pet shop, but it is worth seeking out for fans of livebearing fish.