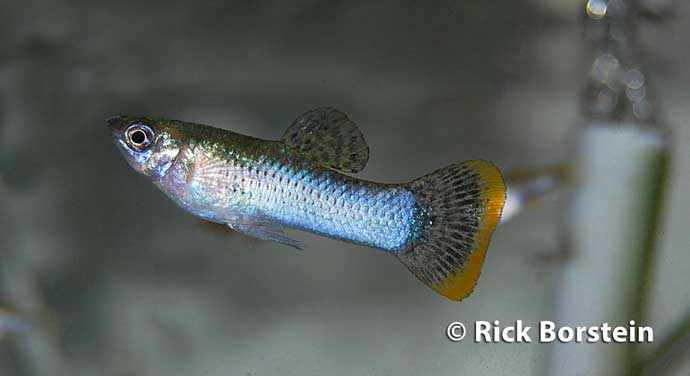 Poecilia mexicana "Campeche" is a livebearing poecilid (Molly) found in Mexico, Belize, Costa Rica, Honduras and possibly Panama. The common name for this fish is the Shortfin Molly, probably in reference to the fact that males do not have extended dorsal fins. The Atlantic Molly nomenclature is accurate given where this fish is found.

Male, Poecilia mexicana "Campeche" is a very pretty fish with nice green/black/blue speckling on the side and a notable yellow edge on the caudal fin. Females are rather mundane in appearance, but are robust, strong swimming fish.

Fun Fact: Research has shown that Poecilia mexicana is the original female parent to the all-female Poecilia formosa, another Molly which was the first vertebrate proven to use fully unisexual (diploid) reproduction. (The male parent is P. latipinna).

Poecilia mexicana "Campeche" is found along the Atlantic slope of Mexico from the Rio Bravo basin basin into Costa Rica and Honduras. This fish is found in a variety of habitats from coastal lagoons, to shallow pools, and rivers, in both freshwater and brackish environments. This is a common fish along the Atlantic Slope and is highly adaptable and successful.

A variety of populations are or have been available in the hobby including Campeche, Rio Purification, and Laguna Ocom.

Poecilia mexicana has been introduced into many other countries. Populations exist in the US (Hawaii, Texas) and as far away as French Polynesia. NOTE: Hobbyists should never release fish into the environment.

Size: Males- 4 inches, Females 4.5 inches.
Maturity: 1.5 inch
Sexual Dimorphism: Males are more colorful and have a yellow edge to the tail and gonopodium

In the wild, RR Miller reported individuals up to 3-3/4". I have seen even larger males of at least four inches such as the one pictured at the end of this article. This male was entered in the American Livebearer Association annual show by Charles Clapsaddle.

Poecilia mexicana "Campeche" presents zero problems. A ten gallon or larger tank works great and then you only need to provide neutral to hard water and temperatures of 66 to 78F. This fish will grow bigger when housed in larger quarters.

In the wild, Poecilia mexicana consumes algae, diatoms, plant matter and decaying matter. They are primarily associated with the bottom and pick constantly. In the aquarium, they readily accept flake food. I fed a variety of flake and small pellets including HBH Graze, New Life Spectrum Optimum H20, and Dainichi Veggie Deluxe pellets.

I obtained a juvenile pair of Poecilia mexicana "Campeche" from Charles Clapsaddle of Goliad Fish Farms of Goliad, TX. Charles very nicely provided a box of fish to support our club. Thanks, Charles!

Like most mollies, this fish is easy to breed. It probably breeds year round in the wild. In my tanks, it breeds continuously. Females swell prodigiously and drop from 10 to 30 babies. Other sources reports higher number of fry; RR Miller reported up to 105 fry from a single female! The fry are unmolested by the parents, so your tank can become quickly overrun. Make sure to thin your population.

I use Marineland Fancy Plant mats in all my livebearer tanks. These plastic, floating plant mats provide a haven for the fry where they stay for a week or two. The large fry are immediately able to eat crushed flake food. The addition of live baby brine shrimp doesn't hurt, but isn't necessary.

Within three months, the fry approach an inch in length and are ready to sell or trade.

Poecilia mexicana "Campeche" is one of the prettiest mollies. It is simple to keep and breed. Mollies, to me, do not get the recognition they deserve in the hobby. They are undemanding and robust and more hobbyists should try the wild types. 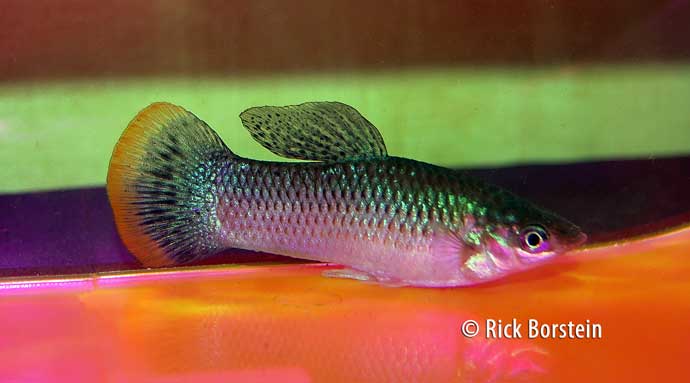