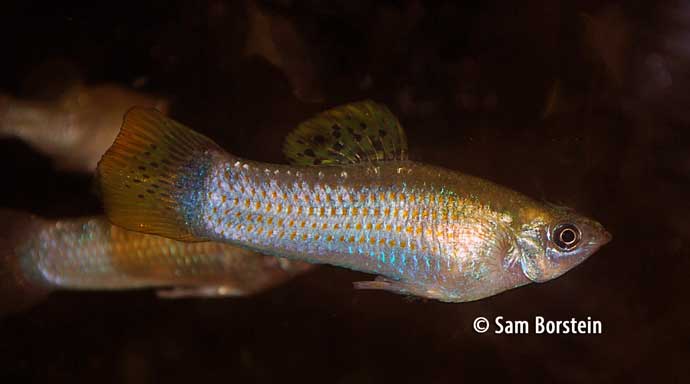 Poecilia gillii "Madre de Dios" is a livebearing poecilid (Molly) which is broadly distributed throughout Central America. According to Bussing (see ref.) it is the most common species in Costa Rica.

Poecilia gillii vary considerably in appearance throughout its range. Most specimens are not very colorful; a green-gray speckled fish with rows of yellow spots along the flanks. Males may have several small spots or a larger dark spot at the base of the dorsal.

Bussing noted that in tideland populations, males exhibit a red edge to the tail and some may even a solid red tail.  Of course, as aquarists, we do like pretty fish, so I was keenly interested when my son Sam showed me a picture of an interesting variant from Rio Madre de Dios, Costa Rica he made when collecting there in 2010. Males from this population have an orangey-red dorsal and tail and are particularly nice-looking when breeding.

Poecilia gillii is most common in slow moving, shallow water areas across its range, however it is found in coastal lagoons, small streams, pools and ditches This fish, like most mollies, is highly tolerant of extremes of temperature and salinity. Bussing reported finding Poecilia gillii at temperatures of 66F to 93F. Bussing also noted that the largest males were found in brackish water.

Jared Lee (see ref.) performed DNA study from Poecilia gillii collected from over forty locations in Costa Rica to determine genetic variance. Costa Rica has four geographic "provinces" which are typically viewed as barriers for population movement. These provinces are separated by impediments such as a mountain range or dry area which prohibits fish from moving across past the boundary. Interestingly, despite some formidable geological barriers, he found that there appeared to higher levels of movement of this fish between these areas than would be expected and subsequently less variation.

Maturity: 1.5 inch
Sexual Dimorphism: Males have a larger dorsal and a gonopodium.

Poecilia gillii "Madre de Dios" is easy to keep. I started with a single pair in a ten gallon tank and have been able to maintain 5-6 adults and several fry and juveniles. If kept in a larger tank, I would expect this fish to grow bigger.

In the wild, Poecilia gillii eats filamentous algae and decaying matter. This fish is not picky! I fed a variety of flake and small pellets including HBH Graze, New Life Spectrum Optimum H20, and Dainichi Veggie Deluxe pellets and occasionally Repashy gel foods.

I obtained a juvenile pair of Poecilia gillii "Madre de Dios" from my son Sam in late 2010. In the wild, Bussing reported that this fish breeds year round and in my experience it will breed more or less continuously. Gravid females will drop 10-30 fry at at time, but the parents will give chase to babies, so it is a good idea to provide cover.

I use floating plastic plant mats (Marineland Fancy Plant mats) in my livebearer tanks. These plastic, floating plant mats offer a a tightly woven series of plant stems which make for a good fry haven. The fry are immediately able to eat crushed flake food, but the addition of live baby brine shrimp might ensure that more survive.

Within three months, the fry approach an inch in length and are ready to sell or trade.

Poecilia gillii "Madre de Dios" is a rare and attractive variant of a fish which is not common in the hobby. While I am not into line breeding, I imagine that starting with this fish could be a good project for a commercial breeder.

For the rest of us who enjoy wild-type fish, Poecilia gillii "Madre de Dios" is a pretty, easy to keep fish deserving of a place in our fishrooms.