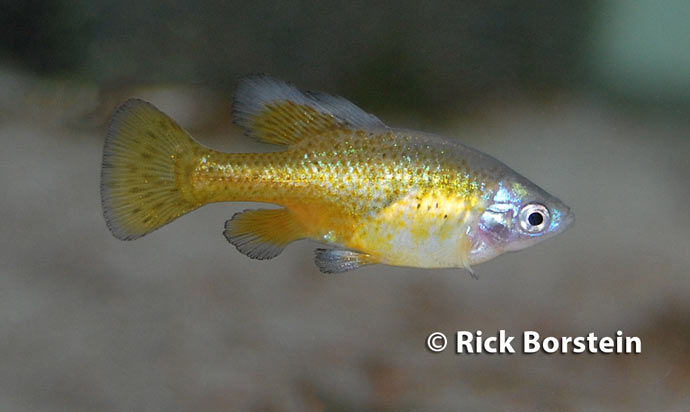 Skiffia multipunctata is a livebearing goodeid from Mexico. Depending on how you count them, there are between 35 and 45 goodeid species. The genus Skiffia comprises S. bilineata, S. francesae, S. lermae and S. multipunctata.

Skiffia multipunctata is a highly variable fish in coloration and spotting. I have seen individuals which were almost totally black and other individuals, such as the Sayula color form above, which are quite yellow-gold. Plus, there are combinations with both black and gold. Compared to many other goodeids (I'm talking about you, Skiffia lermae!), it is very good looking!

While goodeids are rare in the hobby, Skiffia multipunctata is pretty enough to make it relatively popular as a goodeid.

The Sayula Skiffia multipunctata is a fish in some dispute. This fish was originally collected in 2007 by some British hobbyists who thought it was Skiffiia francesae, which some folks believe is extinct. The American Livebearer Association believes that it is a variant of Skiffia multipunctata.  This fish is occasionally referred to to by a numeric designation of sp 188.

Because of this dispute, it is important for hobbyists to maintain this fish separate from all other Skiffia populations and to use its full name nomenclature: Skiffia c.f. multipunctata "Sayula, Jalisco, Mexico".

Whatever scientists eventually decide, this is a pretty fish.

Skiffia c.f. multipunctata "Sayula, Jalisco, Mexico" is easy to keep. Like other goodeids, it prefers water temperatures between 68 and 74F. I kept a group of six in a 10 gallon tank and they did fine in ordinary (hard) Chicago water with a pH of 7.4 and 300ppm hardness. Males will sometimes give mild chase to other males, but no damage is done.

I obtained a group of six juvenile Skiffia c.f. multipunctata "Sayula, Jalisco, Mexico" from Rob McClure of the Milwaukee Aquarium Society after speaking to the club in Feburary, 2013.

I placed the fish in a 10-gallon tank which contained a thick mat of floating plants and a sand substrate. Filtration was provided by a four-inch Swiss Tropical Poret Foam filter. I performed weekly water changes of two-thirds of the tank volume and the fish grew steadily. By June 2013, the male was about 2.5" long and a beautiful golden color. About a month thereafter, I noticed the first obviously pregnant female. I was very pleased to see seven largish fry in early September 2013.

Initially, the fry hid in the floating plants, but after a couple of weeks, they carefully joined the adults in the open areas of the tank.

Skiffia c.f. multipunctata "Sayula, Jalisco, Mexico" is a colorful and robust goodeid that is worth locating. It is not difficult to keep and deserves to be a popular aquarium fish.