Xiphophorus helleri-guentheri  "Golden Stream" is a livebearing poecilid found in the country of Belize. The Xiphophorus genus is composed of 26 described members of platyfish and swordtails, but there may be more.

Finding information on this fish is challenging. Some scientists do not recognize any of the swordtail subspecies of which this helleri-guentheri is an example. A "splitter" (like me) will always refer to this fish by its full designation and location. A "lumper" would just say it is a green swordtail. To me, it looks quite a bit different than the Mexican green swords I have kept. Regardless, it is best to refer to it by its full name when sharing fish with other hobbyists.

Xiphophorus helleri-guentheri  "Golden Stream"  is a member of the deep bodied, southern clade of swordtails. Both males and females are pretty large fish. Females are thick and robust.

Xiphophorus helleri-guentheri is found in the Golden Stream watershed in Belize, which is in the Southern half of the country.

Xiphophorus helleri-guentheri is easy to keep, but this larger livebearer does best in a 36-inch or longer tank such as a 40 breeder. Swords do well in neutral to hard water between 70 and 77F, but can handle cooler temperatures if necessary. Weekly partial water changes are recommended.

I obtained two pairs of this fish from Pat Hartman of Vicksburg, MI, although I had to do so in two transactions. I bought the first pair at the 2013 ALA Convention in Grand Rapids, MI. I obtained a second pair when Pat spoke to the Chicago Livebearer Society in September, 2013.

I kept both pairs in a 40B tank (sand substrate) which was filtered by a 6-inch Poret foam filter. Tank temperature was maintained at 76F and I used standard Chicago water (pH 7.4, 300PPM hardness). This tank also housed some non-aggressive cichlids.

One thing I have noticed about the southern swords is that they do not "square up" like other poecilids when pregnant. A more reliable method to assess gestation is to view the female from above. When the sides are noticeably swollen, the drop of fry is only a week or two away.

In September, I noticed that one of the females was obviously pregnant. I removed the female to a 10G to which I added a 4-inch by 8-inch plastic plant mat. About a week later, I found about 25 fry hiding in the plastic plants. I moved the female back to the main tank and continued to raise the fry in the 10G tank.

Like most sword fry, the babies are easy to raise. I started the babies on frozen baby brine shrimp, then weened them off onto flake food.

Xiphophorus helleri-guentheri is a larger, robust colorful wild-type sword that should be more popular. If you like swordtails, this is a fish you should locate and keep. 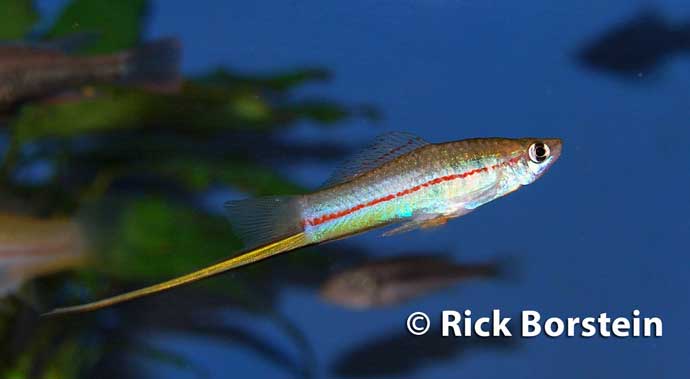 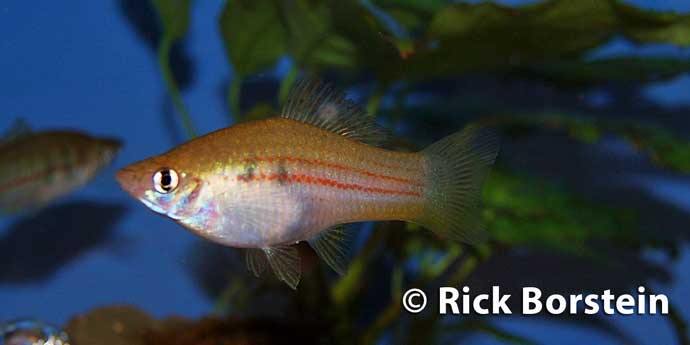