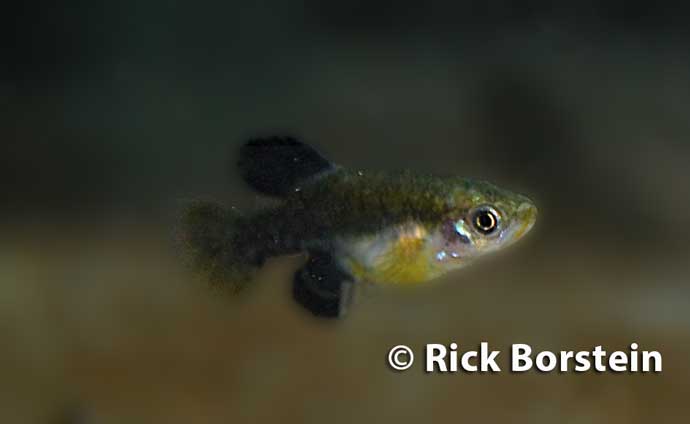 Skiffia bilineata is a rather small fish and seems to be variable in appearance and is easier to maintain than other goodeids. Males are not overly aggressive. When breeding, males are a rich black color with a golden belly. Females are relatively drab in appearance. Unfortunately, this small and fast moving fish is quite difficult to photograph.

Skiffia bilineata is found along the Pacific slope of Mexico, in the Rio Lerma Grande de Santiago basin and the Rio Grande de Morelia basin. Waters for this fish are quiet, shallow, muddy and typically slow with sometimes dense vegetation.

Skiffia bilineata is quite easy to keep. A small group of six fish may be kept in a 5-gallon or larger tank. No heater is necessary and tank temperatures of 67F to 72F suit this goodeid. Like most goodeids, it does not do well in warm water, so keep it at 74F or below.

I have not seen data on stomach content analysis for wild fish,but my guess is that Skiffia bilineata eats algae, insects and decaying matter in the wild. In the aquarium, they will readily accept flake food and pellets. I fed a variety of foods such as HBH Graze, New Life Spectrum Optimum H20,and Repashy Community gel food.

I obtained a group of Skiffia bilineata from two different sources. I received some at a meeting auction of the Madison Area Aquatic Hobbyists and later picked up some at an auction held by the Milwaukee Aquarium Society. In all, I had seven juvenile fish which I housed in a 5-gallon tank.

The tank had a sand substrate and was filtered by y a four-inch Swiss Tropical Poret Foam filter. I performed weekly water changes of two-thirds of the tank volume and the fish grew steadily. At the top of the tank, I floated a plastic plant mat to help conserve fry.

Once the females were about 1.25" long, I noticed the first obviously pregnant ones. A few short weeks later, I detected the first fry hiding in the plants. Both parents will give light chase to the fry, so cover is necessary.

Skiffia bilineata  is an interesting looking and easy-to-keep goodeid that would be a good choice for the livebearer hobbyist who wants to try a "first" goodeid. 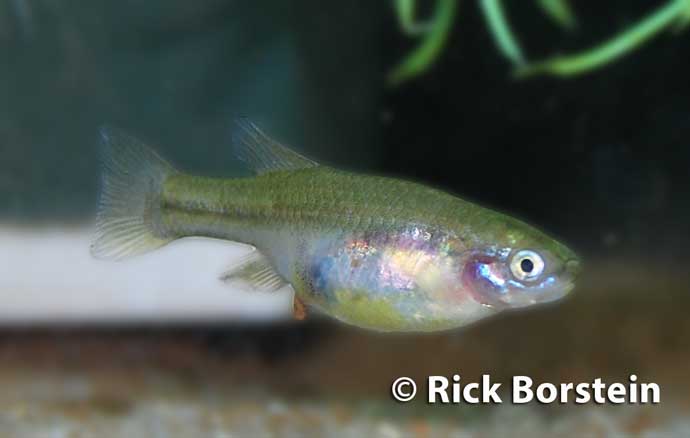