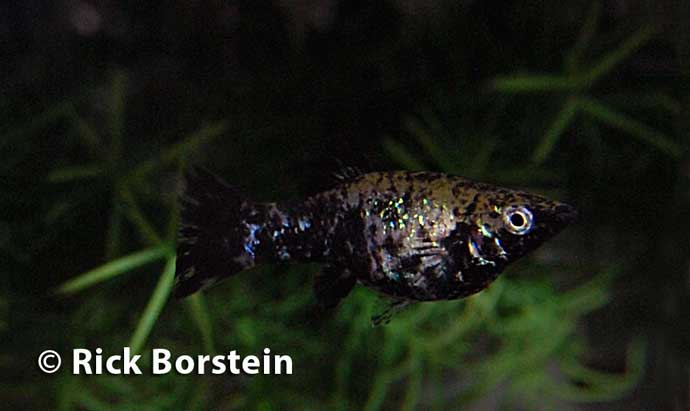 Poecilia butleri is a livebearing poecilid (Molly) found in Mexico. The common name for this fish is the Pacific Molly because it is found almost exclusively along the Pacific Slope of Mexico.

Poecilia butleri is found along the Pacific slope of Mexico from the Rio Fuerte basin to Rio Comasagua. There are numerous reports of introductions into other habitats, so this should not be considered an exclusive range. The habitat for this fish are highly varied from slow flowing streams to estuaries and even ocean bays. It is a highly adaptable fish.

In the wild, Poecilia butleri is found in both plain and reticulated (heavily spotted) populations. The reticulated variety is much more popular in the aquarium hobby and it is indeed a striking fish.

I am not aware of diet analysis for wild Poecilia butleri, but if it follows that of other wild mollies I would expect to find algae, diatoms, plant matter and decaying matter in the gut of wild fish. In the aquarium, they readily accept flake food. I fed a variety of flake and small pellets including HBH Graze, New Life Spectrum Optimum H20, and Dainichi Veggie Deluxe pellets.

Wild-type mollies and Poecilia butleri are not the easiest fish to breed successfully. Males can be very tough on females and some species are voracious fry predators.

I obtained five fish at the 2012 ALA and put them in a 10G tank with some floating plastic plants. I lost all of my females during the year and fortunately I was able to obtain several new females from Scott Tetzlaff at the 2013 convention in Grand Rapids, MI.

After a few more months, I still did not see any fry. I waited until I saw a very pregnant female and removed her to a home made fry trap (See  Build your Own Plastic Mesh Fry Trap) where she eventually delivered a total of nine fry.

I found the babies to be very weak swimmers, which probably was the reason that I never saw any babies in the adult tank. I suspect that wild females drop their babies into heavily planted, shallow areas.

Poecilia butleri is a nice-looking molly which can be challenging to keep. However, with a large enough tank or by using a fry trap, reproduction is possible.