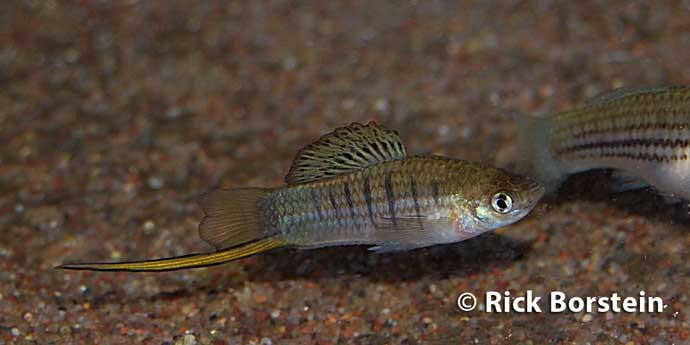 Xiphophorus nezahualcoyotl is a livebearing poecilid which is found in rivers and creeks in the state San Luis Potosi, Mexico. The common name for this fish is the "Northern Mountain Swordtail" since it occurs at higher elevations. In the hobby, they have picked up the colloquial name of "Nezzie Swords", most likely since the species name is difficult to pronounce!

The genus Xiphophorus is composed of 26 described members of platyfish and swordtails.Male Xiphophorus nezahualcoyotl are active fish and interesting to watch. Nezzies are one of the smaller swords, but this fish certainly has some personality and will chase other fish occasionally. While not spectacularly colorful, it is a handsome fish. The overall body color is a tan or green/grey, The scales are edged in black and there are six or seven vertical bars on the flanks. The bars sometimes fade depending on the mood of the fish. Males have a prominent greenish dorsal and a yellow-orange sword edged in black. Females are somewhat drab in comparison and do not have vertical bars. .

This fish is found Rio Tamasi drainage basin in San Luis Potosi, Mexico. Most often, they are found in shallow streams with moderate current, usually associated with algae-covered rocks.

Xiphophorus nezahualcoyotl is not difficult to keep. Prrovide neutral to hard water and temperatures of 68 to 74F. Males do give chase to females, so it is a good idea to provide some hiding places for the females.

In the wild, Xiphophorus nezahualcoyotl are mostly algal grazers. In the aquarium, they readily accept flake food. I fed a variety of flake and small pellets (1mm or under).

Although most livebearer hobbyists would not consider Xiphophorus nezahualcoyotl difficult to breed, it took me three tries before I had success with this fish.

One thing to understand about Xiphophorus nezahualcoyotl is that they actively eat their own fry. I generally float some plastic plants in the tank where the babies take refuge, but that did not seem to be enough for this fish. I tried trapping the fish, but the Plastic Mesh Fry Trap I used was too small and likely too stressful for the female and no babies worth forthcoming.

Fortunately, I did have success using another method which I will relate below. In April, 2014, I obtained several juvenile Nezzie Swords after speaking at the Milwaukee Aquarium Society. I placed these fish into a 15G long tank which was filtered by a large Swiss Tropicals Matten filter and maintained at 72F (room temperature). The fish grew quickly and in December, 2014 I observed a gravid female.

After seeing a post on Facebook of a very large glass v-trap, I decided to build one myself. I hope to provide documentation for building one of these soon, but the trap took about two-thirds of a ten gallon tank. I also added some floating plastic plants. The key to this trap is that water flow moves any dropped fry down a slope to a separate compartment.

About a week after placing the female in the trap, I found a dozen, tiny fry. I fed the fry on newly hatched baby brine shrimp and they grew quickly.

Xiphophorus nezahualcoyotl is an unusual, wild-type sword not typically found in pet stores. It appears to have made a stable appearance in the livebearer hobby because it is pretty and unedemanding. 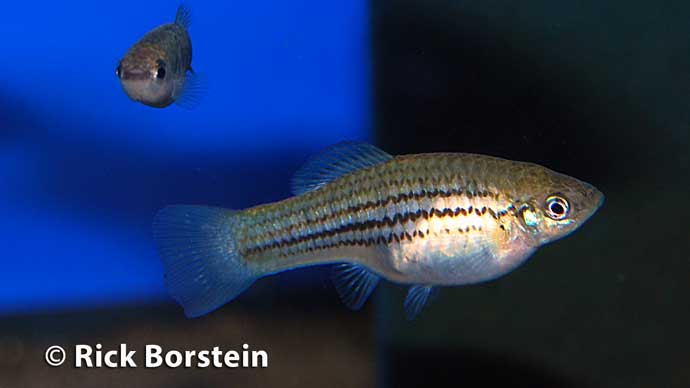