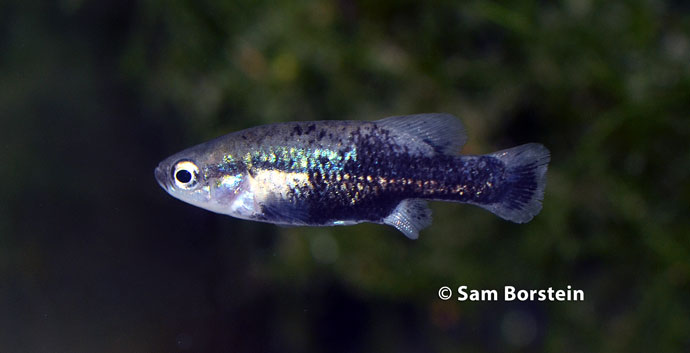 Genus- Allotoca= Greek, allos = other + Greek, tokos = birth
Species- dugesii= Honorific for A. A. Dugès who sent the fish to Bean for identification

Males of this species come in two predominant color forms; black and yellow. For black males, the amount of black coverage is variable. Unlike other goodeid species, female Allotoca dugesii are very colorful and beautiful sporting black and electric blue blotches on the side.

While these fish look great in the aquarium, they look spectacular when you see them in the wild.The yellow males are bright golden yellow when you pull them out of the water.

I was fortunate to be able to collect Allotoca dugesii in November, 2014 with members of the Goodeid Working Group. We found this fish at Rancho Paso del Molino Viejo, Tangamandapio, Michoacán, a very small town with a population of 283. The Rancho Molino locality is a small stream which ran through several small farms in the area, and was perhaps one-quarter mile long.

Scientists lump localities into greater basin areas. The basins of Zirahuen, Santiago, Lerma, Morelia, and Patzcuaro are the areas where Allotoca dugesii is found.

In all cases, the fish in these localities are either endangered or critically endangered, primarily due to pollution or the threat of it.

Typical habitats for Allotoca are shallow, flowing spring-fed streams and ponds with abundant aquatic vegetation. You can get an idea of the Rancho Molino locality from the picture I took below. It's actually very pretty. 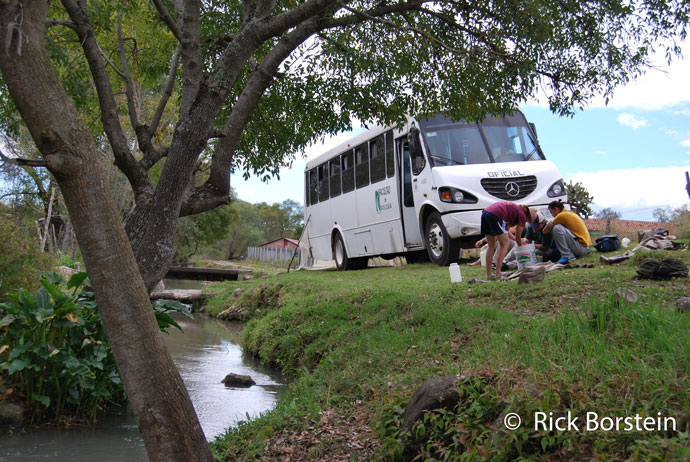 The Goodeid Working Group list four ESUs for Allotoca dugesii. The Rancho Molino location is Altdu4. When sharing these fish with others, you should designate the ESU ID for the fish you have which uniquely identifies the location. It's a good idea to include any other collection data you may have such as year, name of the collector, etc.

Allotoca dugesii is not a difficult fish to keep, at least for anyone who has kept goodeids. This fish is best kept in neutral to hard water at 68 to 74F. Provide some current and furnish the tank with hiding places where the fish can get out of the current. Add either plastic or aquatic plants to provide cover for the babies. A fifteen gallon or larger tank is recommended.

In the wild, Allotoca dugesii is ominivorous. In the aquarium, they readily accept flake food. I would recommend offering a good quality vegetable flake. I fed mine HBH Graze and Dainichi Veggie Deluxe pellets. I also offered the occasional treat of Repashy Spawn and Grow gel food. You need to take care to only feed high protein food occasionally as the females will become "overgravid" and have trouble bearing their young.

I collected Allotoca dugesii in "Rancho Molino, MX" in November 2014 and was able to get eight specimens back to my home in Chicago by Thanksgiving. The fish that I obtained were large juveniles about 1.5" long. I was thrilled to be in possession of diverse group having both black males and yellow males and several great looking females.

I placed the fish in a fifteen gallon long tank without a heater, Typical temperatures for this tank were 65F to 73F. Filtration was provided by a Swiss Tropicals matten filter.This tank also had a thick mat of Java Moss.

It took some time to bring the fish into condition. but I found that feeding Repashy Spawn and Grow gel food every other day gave the fish robust vigor. After getting the fish looking good, I reduced feeding of this protein rich food to twice a week.

When the fish started approaching two inches sometime in February, I saw gravid females, but no fry even after the female "deflated" post birth. I suspect that despite the heavy plant cover, that the adults picked off the tiny babies.

The next time I observed a gravid female, I moved her to another tank and placed her in a specialized brood tank (See A Brood Tank for Livebearers).

After a few days in the trap, she delivered thirty-two, 3/8" long fry. Initially, the fry lay on the bottom of the tank an hour or so. After this initial period in which they are essentially invalids, they may swim about with remnants of the trophetaenia still attached. The trophetaeniais is an umbillical-like structure from which fry derive nutrition in the "womb" of the female. The trophetaenia completely disappaears by the seond day free-swimming. I was surprised by the number of the fry and their small size. Most goodeids I have worked with have fewer and larger fry.

The fry are not strong swimmers during the first 48 hours, which probably explains why so few survivied in the tank. I offered live baby brine shrimp and the fry were able to take them immediately. I found that the fry were slow growers and needed to be kept on baby brine (ideally) for the first couple of weeks.

Tip: After harvesting live baby brine, move it to your refrigerator. You can feed it for up to 48 hours. 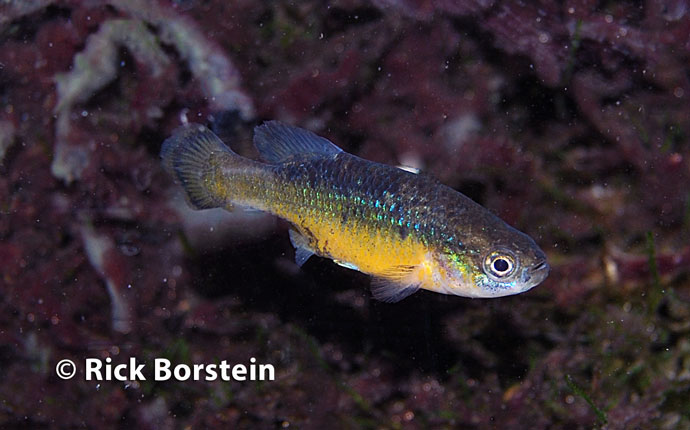 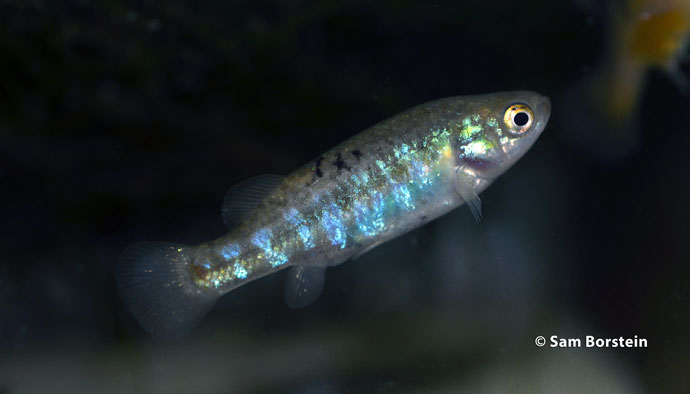 Allotoca dugesii "Rancho Molino, MX" is one of the best-looking goodeids and it is endangered in the wild. Why not dedicate a tank to these endangered animals?