Genus- Brachyrhaphis = Greek for “short needle”
Species- rhabdophora= Latin (possibly) a rod + to bear, probably in reference to the gonopodium

Brachyrhaphis are not common fish in the aquarium hobby, but you will find livebearer hobbyists who maintain them.They are active swimmers that make for an entertaining tank to watch.

Brachyrhaphis haven't been studied a lot, but there has been research which indicates that male Brachyrhaphis rhapdophora are more streamlined and have larger caudal peduncles in predator-rich environments. In other words, when predators are around, the best swimmers survive. Makes sense to me!

Brachyrhaphis rhabdophora is found in streams and some ponds in Costa Rica.

Brachyrhaphis rhabdophora, like other members of the genera, can be a bit chippy. I kept this fish in a species tank, so I don't know how they will behave with other fishes, but I would expect that they may be fin nippers. Even though they are small, males can be relentless in their courting, so make sure to provide some cover to give the females some respite, I suggest a 15 gallon or larger tank (since adult females are robust) and make sure that the tank has some plants and hiding spots. My fish did fine at 74F in ordinary Chicago tap water (pH 7.4). I performed weekly water changes of two-thirds of the tank volume.

In the wild, Brachyrhaphis rhabdophora are micro-predators which eat insects which they take from the surface or near the surface. In the aquarium, they readily accept flake food. I found feeding small amounts of Repashy Spawn and Grow gel food got females into condition quickly.

I obtained six Brachyrhaphis rhabdophora at the 2014 ALA Convention from Pat Hartman. The location provided for the fish was "Rio Javilla, Costa Rica, Radda 1980". Thus, the fish I obtained were descendants of wild fish collected almost 35 years earlier and maintained by hobbyists over the years. It may be that the fish in the hobby have diverged from the wild type. However, I will note that pictures I have seen in books look similar to the pictures I supplied with this article.

As mentioned above, males aggressively court females. It's somewhat comical to see the extent to which the tiny males wil zip around the much larger females in their efforts.

My previous experience with Brachyrhaphis roseni informed my decision to use a trap to capture the young as Brachys have a well deserved reputation as fry predators. Once I spotted a gravid female, I netted her out and transferred her to to 5-gallon tank containing a mesh breeding trap (see Build your Own Plastic Mesh Fry Trap).

After about a week in the trap, the female dropped over 30 smallish fry which were immediately able to eat baby brine shrimp. I removed the female and the breeding trap andI raised the fry in the same 5-gallon tank. I performed twice weekly water changes of 66%. In about six weeks, the fry were over half an inch and ready to distribute.

Brachyrhaphis rhabdophora are not a common fish in the hobby, but since both males and females are pretty, it is worth seeking out.. 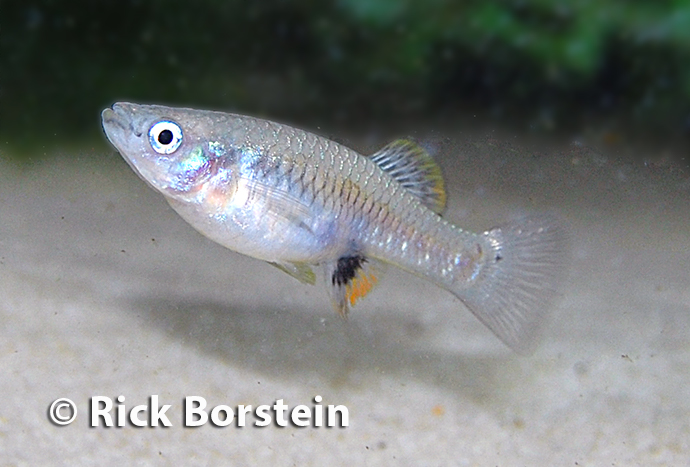