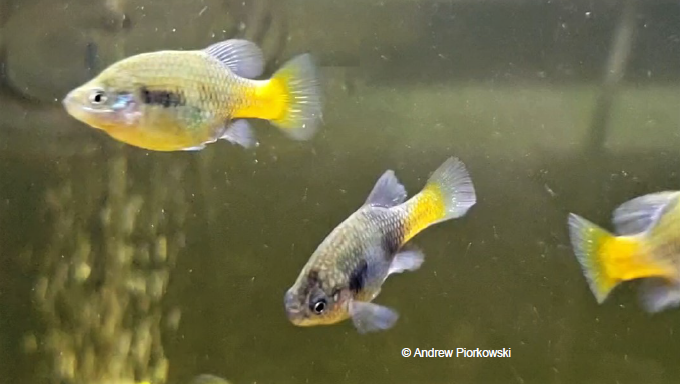 Xenotoca doadrioi is a livebearing fish in the Goodeidae family from the Mexican state of Jalisco. This small colorful fish was formerly considered a regional variant of the species Xenotoca eiseni but as of 2016, was re-described as its own distinct species. The “eiseni-complex”, was thus broken into doadrioi, lyonsi (from Rio Tamzulae), and true-eiseni, all collectively referred to as Redtail Splitfins. However, by the time of its formal description, doadrioi had already been extirpated from half its the historical locations and is at risk of extinction in the remaining locales due to irrigation and introduced species.

In terms of its relation to other goodeids, it is placed in the Chapalichthyini tribe, which includes Ameca splendens (Butterfly Goodeid), Zoogoneticus tequila (Tequila splitfin), and Chapalichthys encaustus (Barred Splitfin). That group differentiated from a common ancestor of the Ilyodontini tribe sometime in the late Miocene/early Pliocene. Oddly enough, although placed in the same genus as Xenotoca variata (Jeweled Splitfin), recent analysis of the eiseni-complex indicates they are more closely related to Xenoophorus captivus (Relict Splitfin) than the Jeweled Splitfin, which means that this species may be assigned to a new genus in the near future.

The males of the species are noted for their striking coloration in comparison to the relatively plain looking females. In addition to the red/orange tails, their bodies tend to be marked by iridescent blue scales, vertical black banding, and a “saddle” band of yellow or gray in front of the dorsal. This coloration will vary depending on the age and reproductive stage but coloring generally increasing in complexity as the fish matures. A very small fish, even older adult females are less than 2 inches long!

As with all goodeids, attempts should be made to maintain species based on their collection location, if it is known. As a result of the re-description of the eiseni-complex, there is a high probability that when looking for this fish you may encounter misidentified species or hybrids. Fish listed for sale as “eiseni” may be any of the 3 species or a hybrid depending on the integrity of the captive line and the knowledge of the previous keeper. Special care is recommended to obtain fish from a known location and for that to be communicated forward when sharing fish with other keepers. When I received my fish, they were referred to as “Eiseni San Marcos”.

Xenotoca doadrioi is found in the endorheic drainage of the Etzatlan region near San Marcos in Jalisco, in water outflows cut off from the ocean, resulting in lakes or swamps. The type location for the species is actually a small, permanent pond. The species has been found in quite varied habitats; clear to turbid water and ranging in little to no plants to locations overgrown with vegetation.

Xenotoca doadrioi is easy to keep. I recommend starting with a group of at least six fish in a 10 to 20-gallon long tank. A gregarious fish, a larger starter colony is preferred as it diffuses aggression by spreading it amongst a number of fish. The species has a reputation for being fin nippers although I have not observed this in my tank. I keep them with live plants such as Sagittaria subulata, Bacopa caroliniana, and various Cryptocorine species. Live plants offer many benefits for the health of the aquarium, including hides for fry and to break up lines of site (some fish may become stressed if unable to hide).

In my tanks, I use a thin layer of simple pea gravel for substrate, hang-on-back filters, and aeration. Goodeids, in general, prefer cooler water, so temperatures of 60F to 75F work well. It is not necessary to heat the aquarium unless needed to maintain temperature stability.

Species only tanks are recommended due to the rarity of the fish. I keep bristle nose plecos (Ancistrus sp.) and have observed no issues. A prolific fish and peaceful fish, the starter group can be allowed to grow into a nice sized colony as they thrive large groups!

In the wild, Xenotoca doadrioi are omnivorous. In the aquarium, they readily accept just about any type of flake food but it is highly recommended to provide plant-based food options as well (e.g. Spirulina) in addition to standard flake. A diet too high in animal-based proteins may result in bloating issues.

I obtained twelve un-sexed juveniles from a local swap prior to a Chicago Livebearer Society meeting in 2017. At the time, they ranged from around 0.75 to 1 inch. I placed them in a 20-gallon long with some plants, feeding them a varied diet. Approximately two months later, the males had begun differentiating from the females, developing bright orange tails. As an active fish, many types of behaviors observed performed by males, directed at other males as well as females (the fin nip reputation could be derived from the male’s tendency to chase other males). Females were noticeably pregnant by the time they were about 1.5 inches long with fry born after approximately 2 months. Counts may vary, depending on the age and size of the fish, but my fry drops have been between 5 and 20 fish.

Initial fry drops should be protected via use of a net breeder or separate fry tank as the adults may predate on fry. While larger than Poeciliid fry, the fish are relatively helpless at first, preferring to rest on plants near the surface for the first couple days. However, once the fry are free-swimming they can be added back to the adults’ tank with minimal issues (I released my first babies directly into a thick growth of Sagittaria). Subsequent fry drops in the tank should be fine, as the adults tend to leave young fry alone when there are other juvenile fish present.

Xenotoca doadrioi is a colorful and gregarious fish that is easy to keep. Due to their rarity in the wild, in addition to the hobby, obtaining and breeding this fish is truly a worthwhile venture! Be careful of mislabeling and confirm your sources! 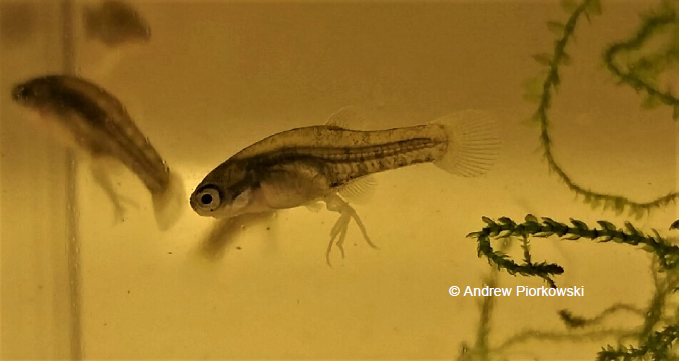